As some of you may know, this year I entered the Vanna’s Choice Contest 2011.  My project was lucky enough to have been chosen as a finalist!  😀  This actually posed some logistical problems, as my finalist project was also one that was intended to go into the new book, Loom Knitting for Little People!  We had only a very small window of time to be able to get his photos professionally taken before he had to embark upon his journey to strut his stuff in front of Vanna White herself!

Although I’m sure she was very taken with him, as how could anyone not be, he wasn’t among the winners in his category.  The competition was extremely fierce this year…just check out the winners and see for yourself!

He finally made it back to us this past week, weary and travel worn, but thrilled to be in his own home again…and we were thrilled to have him!  🙂 In fact, my younger daughter and I got in a tiny little tussle over who was to get to hold him first when we he out of the box, lol.

I’d love to introduce you to our very special, extremely colorful and ever entertaining friend, Koby the Striped Kitty!

As you can see, he didn’t come alone in that box…he brought a few goodies with him!  For being a finalist, he got to take home a Laugh with Lola comic book, a Lion Brand Yarn catalog, a thank you letter from Michaels, and my personal favorite, a $25 Michaels’ gift card!  How cool is that?!

Koby is one of the projects you can make in the upcoming book, Loom Knitting for Little People!  Yes, you too can have your very own special striped kitty to sit next to you on the couch while you loom up fantastic creations, or he can keep watch over you while you’re sleeping, or he can sit in the front of the shopping cart and keep track of your coupons while you brave the crowds at Wally’s!  lol. 😉

Well…if not for you, then some little kidlett will absolutely love his company!  Though, I do warn you, that you might just want to plan to make two, because he seriously has a way of needling his sweet little personality into your heart and it’s super hard to let him go to someone else.  We know this personally.  This Koby you see above is our 3rd in the Koby family.  The first two were commissioned by Provo Crafts almost exactly one year ago.  It was sooooo hard to send them away and know that we weren’t to see them ever again.  My daughter Emily and I worked together to create these first two: 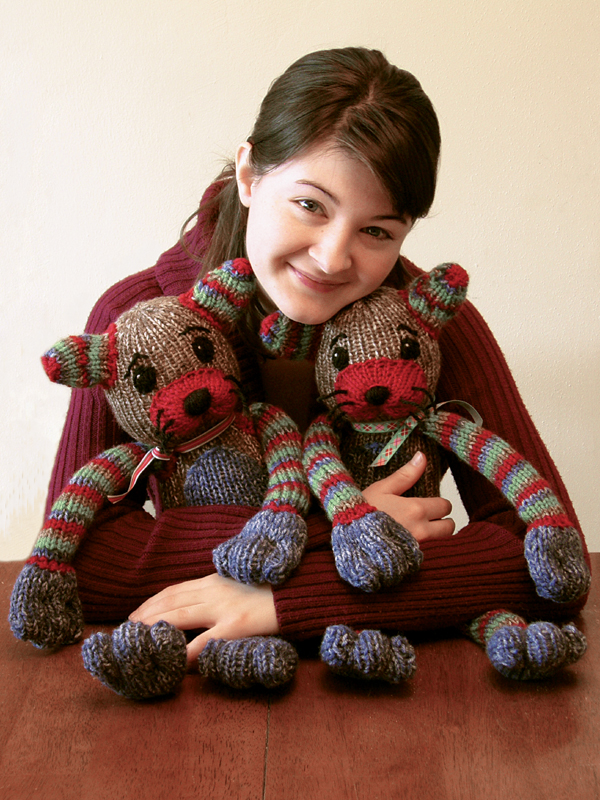 See what I mean?  Just look at the love in her face…that’s full fledged Koby Kitty Love! 🙂

There’s someone else who’s been experiencing the wonders of creating her very own Koby the Striped Kitty…Jenny Stark, aka: guppygirl, has been working on the sidelines to create one of her own to share with you all…and in pretty girlie colors too!  Pop on over to her bloggie and take a look at what she’s been up to!  I think my kitty and her kitty need to make a play date, lol! 😉

There are couple more project previews in the works around the world wide web.  We have some adorable Jester Hats in the making by our lovely and talented, Kelly Jones!  She’s been teaching a class in the Yahoo Loom Class Group all based on mitered squares.  This hat just happened to be a perfect fit for her to make, as it’s a conglomeration of mitered squares that make up the hat design…how cool is that?  Pop on over to her blog and see what’s she’s been up to…and while you’re at it, make sure to enroll in the class at Yahoo to learn all about making mitered squares on the loom! 🙂  They’re really fun to do!

There’s another gal who has been working on another preview from the book!  I’ll be sharing all about that on Friday, when I’ll also be talking about a soon to be happenin’ BLOGOVERSARY BASH!!! 😀  Who’s ready for a Par-Tay?

See ya’ all then!

Oh…and don’t forget to pre-order your own copy of Loom Knitting for Little People!   You’ll be helping to get this book project off to a great start, which in turn will be helping to support children in need.  We’re currently at 37% funded with only 15 days to go!  You can pledge today and you won’t be charged until August 4th.  There are some absolutely incredible prizes being announced too!  Here are those that I’ve offered, and join the Markman Looms Yahoo Group to find out how to be entered into a drawing for a $100 handcrafted loom…or a $100 gift certificate for a pledge of $100!  You really can’t lose with that deal!  It’s truly incredible!  😀  Deep heartfelt thanks goes to Lynn Markman for offering these amazing awards and prizes!

Blessing to you all and Happy Looming!

8 Responses to Koby the Striped Kitty~