Posted on December 18, 2013 by gettinitpegged

Ahhh…it’s that time of year again.

And true to form, I did it to myself.  Again.

I filled up all my days so that I had to postpone the Sweater.  But, in my defense, it was actually with permission this time…from the Man, himself. 😉

As you may remember, I was neck deep in a project that is actually much larger than the aforementioned sweater (which I have had thoughts that I would actually die from because it was so large, lol…the Sweater, I mean).  Now, here I go and commit myself to not only doing one of these huge knitty items…but TWO!

Anyway…I can say that the first of the two biggies is finally complete and in it’s box, sent out the door yesterday, on its way to fulfill its intended purpose.  Yay! 😀  Now, it’s  onto Biggie #2, for which we already have a pretty sizeable stack of jaunty squares, ready to be assembled like orderly ducks in a row.

Evan’s Sweater will be right after that…I promise, lol. 😉

In the meantime, I have been able to whip up a few little items (while waiting for yarn deliveries and pattern adjustments) that were meant to be Christmas Gifties this year for my little great-nephews and great-nieces …and great not just because they are the kidletts of my nephews and nieces, but great because they’re all pretty darn TERRIFIC! 😀  This last weekend we bundled up and piled in the car and traversed through hill and dale and 155 miles of I-5, to arrive at my parents house for our annual family’s Christmas Party.  We had a lot of fun and it was really great to see everybody, as it has been such a long while since our move this last Spring.  But, the thing that I probably enjoyed the most was seeing the kidletts open their packages. 🙂

For the two darling sisters, I found two adorable little Minnie Mouse outfits (matchy without being too matchy-matchy)…for which I made these equally adorable little Minnie Mouse Hats! 🙂  …and they fit! …and not only that, but they actually liked them and wanted to wear them!  Win! (Well, the sister who is 3 yrs old loved it, and proceeded to immediately rip off her current outfit right there and then so she could put the new Minnie Mouse outfit on, including the hat to top it all off…the 6 mo old sister was less obvious about her excitement, but didn’t have any disparaging comments (or squirms or screams) to make about wearing her new hat, so I took that as a sign that she liked it, too, lol. 😉 )

My niece (my youngest sister’s daughter) is the youngest of her generation.  She has therefore been kind of grouped together with the newest up and coming generation of kids of the family, even though now she’s just turned 14.  It just kind of goes that way,  although I’m sure that before long she’d like to include herself in the adult group, lol.  Until then, I always like to make sure she has a giftie from our family. 🙂  This year, I got out my dusty crochet hooks and created a slouchy beret and lacy mitts set for her…a little something special with the kids, yet still grown up enough to show we know she’s firmly ensconced in the teen world: 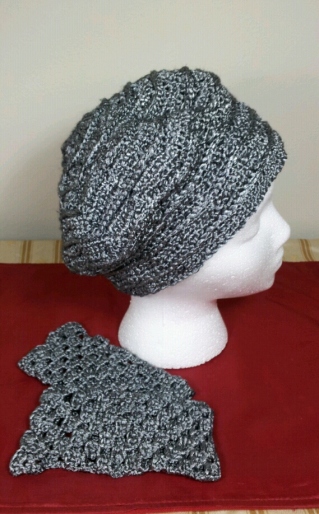 My great-nephews are pretty cool little dudes.  They are cousins and love to wrestle and play with their action figures and toy cars, so I was hoping that they would enjoy their presents at least a little bit.  I knew that because of my giganto knitty commission, I simply didn’t have the time to knit them what I had previously had in mind, so I chose to instead convert this pattern:

into something more totally cool, like this: (click on any of the photos to view them closer) 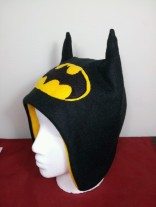 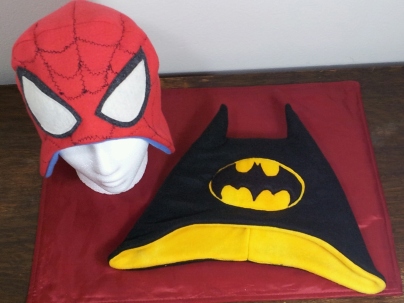 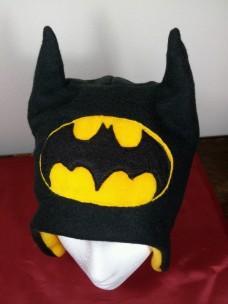 I also found t-shirts to match their superhero caps as well, so they could have the whole package deal, lol. 😉  They really seemed to like them!  They immediately put them on, and seemed to enjoy the novelty of wearing a superhero on their heads, while all the adults went about snapping a zillion photos, because they were just so darn cute…ehem…I mean cool.  They did remove them fairly quickly, in favor of more presents and more of the same wrestling/cars/trucks/action figures…but I did see one of them wearing the hat home. I’ll take that as a Win!

This Auntie’s heart is happy. 🙂  Now, it’s back to those looms, haha…

So…what have you been up to on the days leading up to the big Christmas Celebration??  Something fabulously frivolous along with the requirements of everyday living, I hope!